Every year it comes, and every year you think you might be ready for it…but you never are.

The crowds and the scene in San Diego and at Comic-Con were once again bigger and more intense than the year prior. And again the same refrain was uttered: “It’s not even about comics anymore!” But, from where I was sitting in Artists Alley, comics were very much what it was about. Comics, comic art, superheroes… Way back in the southwest corner of the San Diego Convention Center – hundreds of feet from the big booths and displays set up by the various television and movie studios and video game companies – people were into getting sketches drawn of their favorite characters and meeting and chatting with the guys and gals who create the comics.

At least, that’s how it felt from where I was sitting:

But overall, save for a couple of Mexican food dining failures, this years show, for this guy, felt like a success. For the first time in a long time I had real live projects to promote (X-Babies, PIX), and boy did I. Jacob Chabot (artist on X-Babies who sat to my right at the con) and I had 500 promotional bookmarks made up to give away at the show. At the end of 4 days we’re left with about 15. And a lot of people seemed excited by the packet of preview pages we had out to share. Now if that translates to sales, we might be on to something!

And in the furtherance of promoting X-Babies, the fine folks at comicvine.com took the time to interview me briefly. That interview, with my newly apparent staccato speech pattern, can be seen here. Props to interviewer G-Man for pronouncing my last name correctly…but yeah, they did spell my first name with just the one G on the end. I’ll forgive them this time!

And as I was in artists alley, that meant a lot of sketching. As scans appear online or are sent to me I’ll try to post ’em, but in the meantime, here are three from the show: 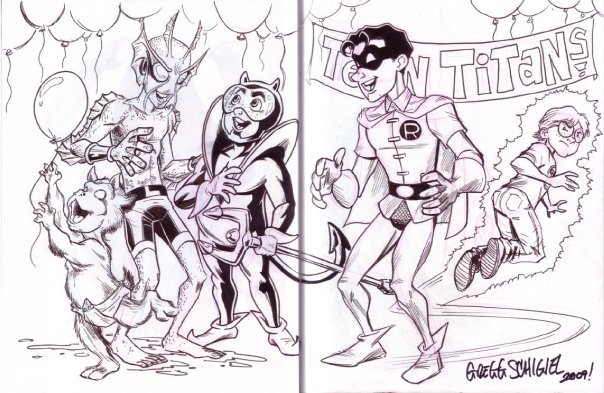 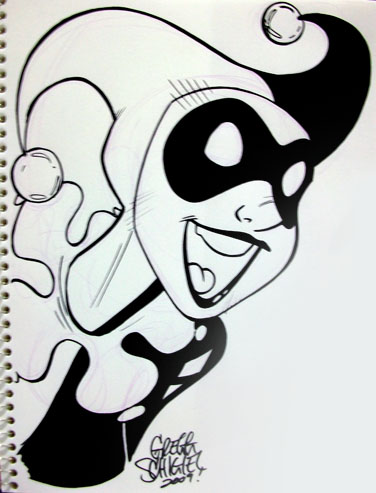 The Wonder Twins
(and yes, I realize their forms and shapes are not animal or water, but this was
a special request by a “friend of the show” and I was fine bending the rules)

All said and done, it was a weekend of lots of drawing, good times with friends, catching up with a lot of familiar faces, meeting new ones, and a lot of baby back ribs and fish tacos.

See you in San Diego next year…